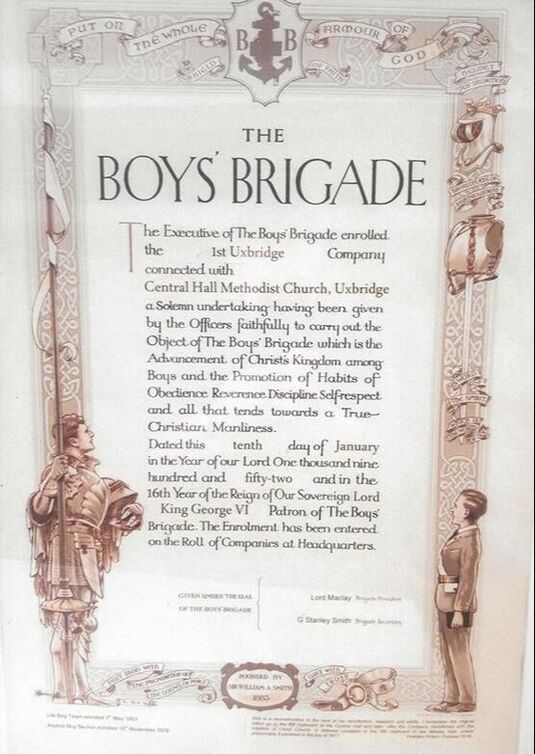 The 1st Uxbridge Company was formed in September 1951 at the Methodist Central Hall Uxbridge. The church already had a well-established Girls' Life Brigade Company, and so it was thought that something similar should be provided for boys. The club, as it started out, had to meet several criteria before it could be accepted as a fully-fledged B.B. Company. Chief among these was the requirements for 20 boys to meet for 6 weeks and follow a laid down programme.
Recruitment was required, and Saturday morning pictures were the obvious place for this to take part. The Odeon gave permission for a publicity event to take place in the interval. So with a B.B. band playing and boys from other Companies, (because they could get in free) marching, the B.B went down the High Street from one end to the other to launch the 1st UXBRIDGE COMPANY.
All criteria were met and the Company was eventually enrolled on January 10th 1952 as part of the North West Middlesex Battalion.
At first the Company was just for the older boys, but in May 1953 we successfully started a Life Boy Team (now Juniors) for the 8 to 11 year age group and our Company grew.
We became part of the new Hillingdon Battalion in 1965. For the first 20 years our Company was based at the Methodist Central Hall, Uxbridge, until 1972 when our Church joined together with the Uxbridge Congregational Church, and we moved to Christ Church.
In 1978 we started our Pre Junior Section, Anchor boys (now Anchors), for the 5 to 8 age group and we are proud to say that we continue today with all four age groups still Advancing Christ's Kingdom amongst Boys.

In January 2022 1st Uxbridge Company will have been in existence for 7o years and during that time we have had 4 captains: